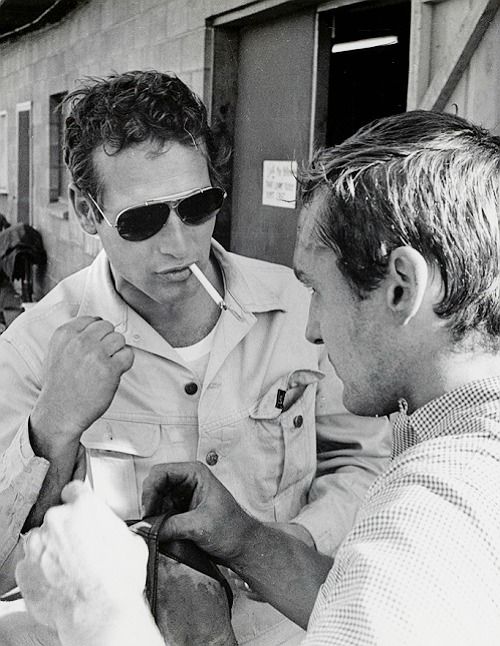 Photo: Paul Newman (L) and Dennis Hopper (R)
Possibly 1967 from the movie “Cool Hand Luke” when they worked together
check out IMDb page for the movie

check out the marketplace for Dennis Hopper’s work as a photographer at
https://www.artsy.net/artist/dennis-hopper

Here’s an excerpt from that site…

Though he is best known as the auteur of Easy Rider (1969) and as a prolific actor, with roles in some of the most iconic films of the 20th century, including Rebel Without a Cause (1955), Apocalypse Now (1979), and Blue Velvet (1986), Dennis Hopper was also an active visual artist. Influenced by a range of actors and artists, including James Dean, Marcel Duchamp, and Andy Warhol, he produced paintings, assemblages, and hundreds of photographs in concentrated periods throughout his career. In the early 1960s, he was among the key figures in L.A.’s avant-garde art scene. Photography was central to his practice; from 1961-67, Hopper shot in California, New York, Alabama, and Mexico, amassing a body of black-and-white photographs ranging from street scenes to portraits of icons of the age, establishing a vision that would shape his acclaimed directorial work.

You can purchase his original material for your home.
Link: https://www.artsy.net/artist/dennis-hopper